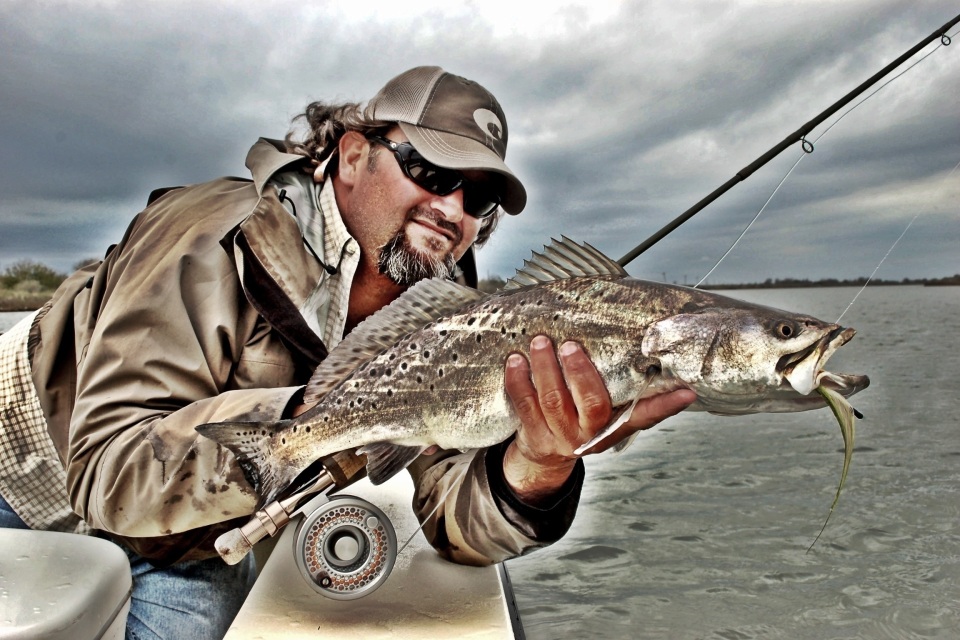 .On a dreary December morning several months ago I stepped aboard Captain Scott Sommerlatte’s skiff for a day of fly fishing. Although Scott often ventures into thin water in search of cruising reds and trout, we were going to try something different. A week earlier, Scott had phoned me with an invitation. “This will be low-key fishing. Let’s just take the skiff, work some deep holes along the channel, and see what happens.” It sounded good to me. In reality, neither of us was sure if we would catch a darn thing, and frankly it didn’t really matter if we did. We just wanted to get on the water.

The skies were heavy and a damp breeze gently pushed across the coastal scrub as we pulled away from the boat ramp and motored down the intracoastal waterway. We soon met a large barge and eased aside to let it pass. I watched as group of gulls hovered above the barge’s massive prop wash, squawking as they always do over the churned up bits of possible food. We pushed on, and after a short drive Scott idled down the motor and positioned the boat to make a slow drift down a steep oyster-lined shoreline.

The banks along this stretch of channel were particularly unforgiving. Riddled with driftwood and carved by storms and surges of water, they had clearly been shaped by powerful natural forces.
Where the steep banks leveled off to flat ground, broad pools of standing water left little doubt that any warm blooded creature venturing across them would quickly be covered in biting insects. It was the type of country that really made you pity the Indians who once lived in it and the explorers who landed on it.

As the tide began to ebb we quietly drifted on the shoulders of the incoming current. I punched casts at scattered mullet flicking on the surface, imagining unseen predators below. Over the next few hours I hooked a couple of small reds, traded flies a few times, and missed a strike or two that telegraphed up from the deep green water. We eventually motored down the shoreline a bit farther, and as a light rain began to fall Scott took a turn on the bow. Up ahead, I could see a bend in the shoreline and several abrupt sandbars. The deep troughs running next to them had a look that would compel almost any angler to make a cast.

As Scott’s boat silently approached the bars, I heard a tell-tale, “Oh yeah,” and turned to see him hooked up on a solid fish. The fish made a few deep runs and then swirled at the surface. When it did, we both saw the charcoal and silver flashes of a big trout. Scott fought the trout for a few minutes and then carefully eased it up to the side of the boat. The trout was fat… really fat, and looked like it easily weighed 5 pounds. It had a beautiful metallic color, strangely like a big steelhead in the cold wet air. I snapped a few photographs and Scott revived the trout, letting it slip out of his hands as it burst back into the frigid water. Scott and I took a break from fishing, had a bite to eat, and watched waves of doves buzz across the water, bound for their scrubby roosts.

As I watched the birds whiz past, I thought back to a time years ago when I worked as a hunting guide. It was one of the most difficult and rewarding jobs I have ever had. I learned a lot about people and a lot about myself during those years. I also learned many lessons about the outdoors. One lesson, though, has stuck with me more than all the rest- it is often better to let things happen than to try to make them happen.

The man who vividly illustrated this to me was a Viet Nam veteran- a sniper. Although he did not discuss his past, I knew he had survived unimaginable and unspeakable events. But what I remember most about this gentleman was what he taught me about the power of observation. Like no hunter I have ever met, he could position himself and stay motionless for hours at a time. And he was quite comfortable doing it. I remember days where we crawled under the cover of a tree or brush pile in the pre-dawn darkness and stayed there until dusk without moving… at all. From our observation points we would watch deer, coyotes, bobcats, turkeys and all sorts of other animals come and go. Woodpeckers hammered away at their trees, and squirrels squabbled and dug for buried acorns. Those trips were physically challenging, but some of the most fulfilling I ever had.

But in all the time we hunted together this man never fired a shot. It was clear he didn’t want to. One evening I asked him why and he said, “Because I want to see what’s going to happen next.” That idea has stayed with me over the years, and has brought me some unforgettable experiences. It has made me realize so many things I subconsciously knew about the outdoors and the power it has to connect you to your past, affirm the future, and put your soul at ease.

And so as I sat on the bow of the Scott’s boat taking a break from fishing, the rewards were all around us- the sounds of the marsh, the flights of birds overhead, and the opportunity to catch a trout and watch it swim away. Once again I was keenly aware that sometimes nature has a better gift in store for you than the one you came for. You just have to let it be