The workhorse of the camera trap, this small waterproof box with an articulating mounting arm contains a PIR motion sensor, programmable on-off timer and radio transmitter.

When it senses body heat motion (animal movement) it wirelessly signals the camera to fire. The unit is quite sensitive, and can be positioned near a trail or a spot where animals are likely to pass. The camera & flashes are kept separate, placed nearby to capture the best composition. This sensor unit has no exposed wires because livestock and rodents eat wires. Not an easy thing to build, but worth it when it all comes together.

Opening the NEMA enclosure unit reveals the PIR sensor, battery box, digital timer module, small circuit board and radio transmitter.  The entire unit is handmade by carefully hacking electronics parts and camera accessories.  The enclosure is fitted with a 1″ Ram articulating mount which can be customized to mount to a pipe, stake, tree, board, and nearly anything else.  This unit can be set to operate on any time schedule and will last many months in the field on one set of batteries. 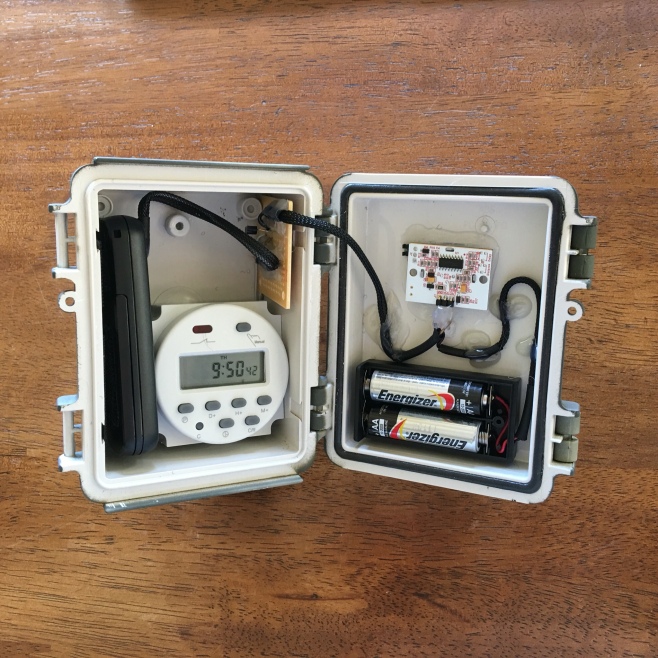 Here is an image captured using the motion sensor.  The motion sensor was mounted to a stake off-camera and aimed to detect animal motion in a precise spot so the subject would be framed correctly and create the desired composition.  If the sensor were placed in the same housing as the camera, it would point the same way the camera pointed and might fire too soon, too late, or too often.