A century-old abandoned farmhouse is alive with activity after the sun goes down, offering a unique opportunity to photograph wildlife with a DSLR camera trap.

A Nikon d3200 body, 18mm lens, motion detector and 2 flashes make up the camera trap system.  All equipment is secured in weatherproof housings. The equipment is set up and focused on the crawl space entrance.

Over a period of several nights, the camera captures images of a grey fox, ringtail cat, and other critters coming and going.

Now… why not move indoors?  The interior of the old house is bleak but has potential as an interesting backdrop for wildlife photos.

So, the camera trap is moved “indoors” and secured with a locking cable snaked through holes in the floor and around a solid joist.

Once the camera and flashes are aimed, focused, and ready, the camera trap is tested by moving in front of the camera’s motion detector- note the flash on the left firing as the camera is triggered.  The camera is initially allowed to “soak” undisturbed for 1 week so the wild residence become more tolerant of it and more willing to walk near it. 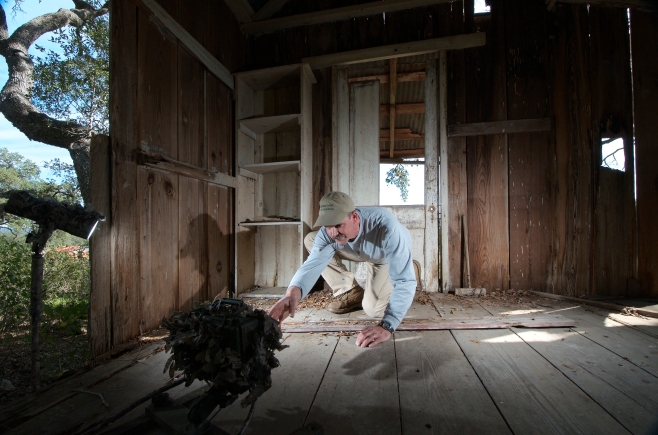 After a week’s time, the camera is checked.  It is always an exciting moment when the case is opened and the SD card is pulled.

The camera set up is moved to a new corner of the house and allowed to soak again.

And one last move… 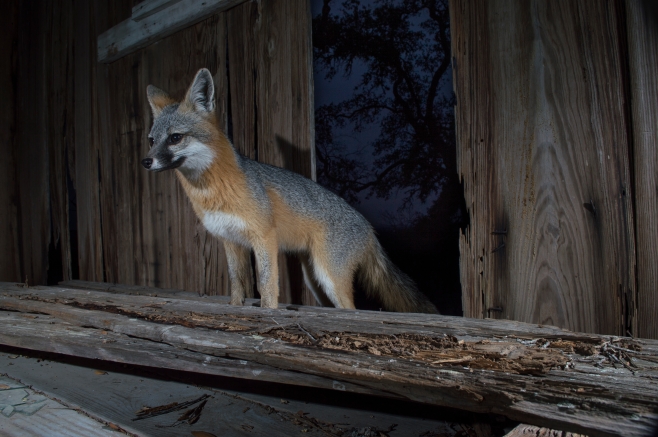 4 Responses to “A Fox in the House”