Fished briefly this evening at Canyon. I rigged up with my usual 8wt. tackle with Type 6 fast sinking line and went straight to the NW fork of Jacob’s Creek where the fish have been the past few weeks. I moved to the back of the creek (#1 on map) and the graph lit up with fish. The signals were scattered but thick and I assume they were shad, which is a good sign if you are looking for stripers. Photo of graph below.

As I worked my way out the channel the water gradually got deeper and as I moved into 40 ft. of water (#2 on map), the bottom of the graph blacked out. The fish were located where the channel drops from 32-45 ft. and they were piled up along the edge of this drop and the bottom of the channel From the signals on the graph, these fish appeared to be a combination of shad up top, white bass in the middle, and stripers below. Photo of graph below.

I wanted to get as deep as possible, so I started throwing a chrome clouser. But after 20 casts… no fish. Then, on a whim, I switched over to a solid chartreuse Deadhead (large craft fur pattern) and fished it with steady machine-gun strips. White bass started hitting and even though this is a large fly for whites they still got their lips around it.

The whites continued to feed for about thirty minutes and finally there was a lull in the action although the graph suggested fish were still feeding. 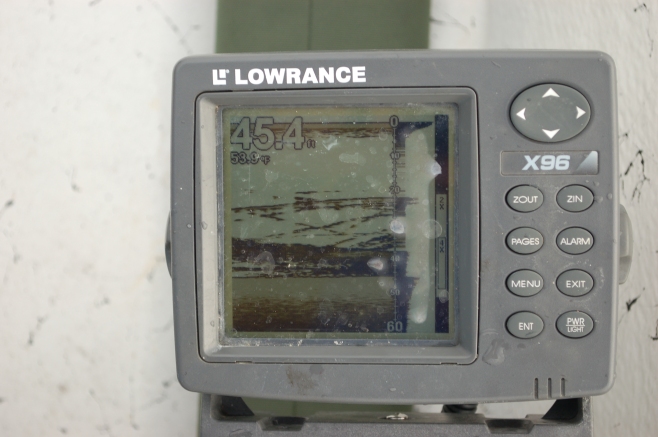 About that time two TPWD Game Wardens pulled up (they looked as cold as I was) and checked out my license. We visited for a few minutes and then they headed out. Because we had sort of disturbed the area, I decided to move slightly SW toward the cove on the Canyon Park shoreline that has the old boat ramps on it (see #3 on map). The graph showed fish in the secondary channel that leads into the broad cove, so I started working them slow and steady with a solid chartreuse Deadhead. About every 5th cast, I would get a solid hit from a striper. 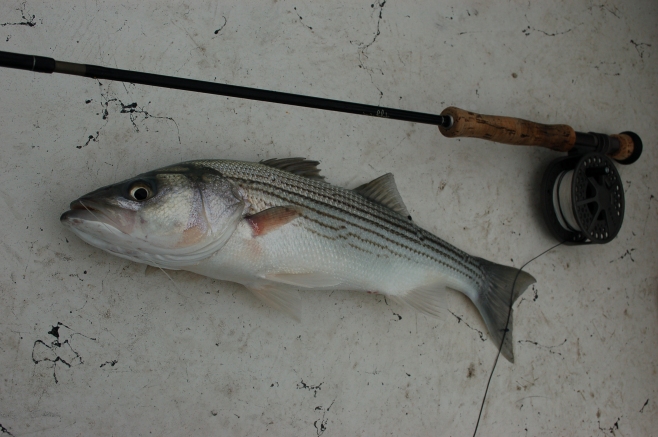 It was a painstaking style of fly fishing, but one I am accustomed to when targeting winter time stripers. You just make a cast, strip the rest of your line over the side of the boat, and let the whole thing sink until you think it has gone down around 25 ft. Then you slowly twitch your fly as you drift. The strikes are subtle but tell-tale solid.

I ended up catching a half-dozen stripers that were carbon copies of each other… all 19-20 inches long. No big fish showed (or at least I didn’t hook them). There is always next time….